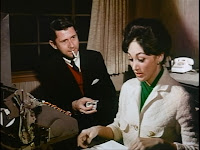 These stills come from Joe Sarno's celebrated sexploitation title of 1966, Moonlighting Wives. Building on the era's fascination with the suburbs as a hotbed of illicit sexual escapades, the film tells the story of an ambitious housewife who turns her part-time stenography business into a classy prostitution ring. As in so many other low-budget films, this story seems to unfold in a world rather like ours and yet somewhat "off." Key to this is the lighting, which either through Sarno's brilliant design or limi 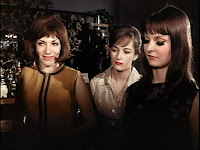 ted resources (in the end, it doesn't matter) portrays sixties suburbia as an incredibly dark and foreboding series of interiors. Early in the film, a sleazy boss hits on his temp, framed against a window of impenetrable blackness, almost as if there is no existence beyond this dingy office. Plotting to expand their empire, three women stand at a bar of shadows, emerging from a black pool and framed against black marble. A wife reluctant to "moonlight" sits with her adulterous lover/pimp on a bed as more shad 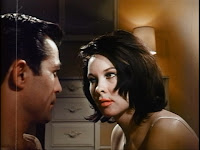 ows creep up the wall. A lowly grindhouse title with no ambitions beyond titillation, the film nevertheless captures a certain sinister spirit--enabled by the no doubt "accidental" poetry of skipping on the fill lights.
Email Post
Labels: Paracinephilia Semi-Formalist Analysis Sleaze