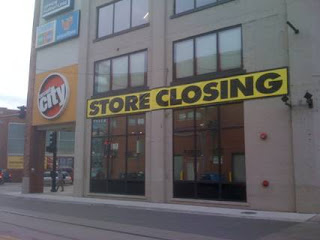 The entertainment industry is an industry—nothing could be more obvious than that. Somewhere out there, suits debate if the market will bear another Will Ferrell sports parody, advertisers conspire to convince us that deleted scenes from Hancock actually constitute a “bonus feature,” and retailers search for new ways to liquidate extra copies of another failed Dane Cook project. And yet, while we may be vaguely aware that budgeting, marketing, demographics, advertising, and distribution have an impact on media commodities, the business side of entertainment often remains remote and almost magical—like Keebler elves shoveling cookies out of a tree.

There are, however, occasions when a radical irruption forces a more direct and all-too-real confrontation between the economic realms of production and consumption, Fudge Stripe factory and cookie jar. I experienced just such a breach a few days ago while having my car’s oil changed at the local Jiffy Lube. With a half-hour to kill, I decided to check out a “store closing” sale at the Circuit City across the street. For those who haven’t heard, Circuit City—once the nation’s second-largest retailer of media and electronics—recently declared bankruptcy, bested by Best Buy. While a few of the flagship stores will remain open, most Circuit City locations are in the midst of liquidating inventory and closing their doors for good.
The rest of this article can be read at World Picture
Email Post
Labels: Commerce Deadish Media Just Depressing New World Order