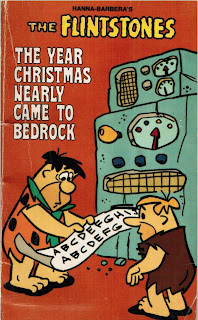 Beyond offering the novel image of a prehistoric computer, this 1979 incarnation of The Flintstones invites us to wonder about the relationship between Christ and cartoon characters. The opening page reminds us: As everyone knows, the Flintstones lived in a Stone Age town called Bedrock. The Flintstones, therefore, were Stone Age people, as were all of the residents of Bedrock. This meant that they lived many, many tens of thousands of years ago, so that a lot of things which we take for granted simply hadn't happened yet. Of course, this includes Christmas. Adopting a secular angle on this debate, the plot here revolves around a contest to rename something called "The Cool, Merry Season After Summer's Harvest is Reaped." The stone-age computer on the cover is programmed to evaluate all the new names for the holiday, but in the end Fred and Barney's incompetence ruins the contest. On the last page, however, we see that Pebbles has arranged her building blocks to spell "CHRISTMAS." Viewers of the original series may remember that Pebbles and Bam Bam sang a song called, "Open Up Your Heart and Let the Sunshine In" (a fragment can be seen here: http://www.youtube.com/watch?v=zpab0a3W4Ec). The song features the line, "She said he causes trouble when you let him in the room/He will never ever leave you if your heart is full of gloom." The "he" here is Satan (or as he is called in the song, "the devil"). The song is now a Christian standard. In the Flintstones story bible, was Pebbles charged with the task of anticipating the advent of Christianity?
Email Post
Labels: Christians Comics Computin'