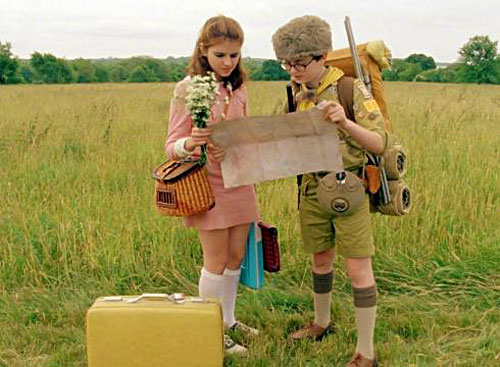 
Once upon a time there was an enchanted island where white kids could be safe and magic.  Rather than play Skullcrusher 3 on the X-Box all day, little boys, of their own accord, sat attentively listening to scratchy recordings of Benjamin Britten's A Young Person's Guide to the Orchestra, apparently to prepare for mandatory induction in the local church's neverending production of Britten's opera, Noye's Fludde.  Little girls, meanwhile, didn't text one another all day in vacuous volleys of OMGs and ROTFLs, but instead sat reading in gabled windows lost in a world of imagination.  Sure, girls could still be pretty ditsy, packing ye-ye records and kittens for arduous hiking expeditions, but they could always count on the chivalry and devotion of respectful, resourceful boys who knew how to build fires, pitch tents, and perform other sensible tasks.  A few kids might be "misfits" or "troubled," but they always found their way, especially when the surrounding community, both young and old, rallied to the siren song of true love.  The adults on this enchanted island weren't perfect, by any means, but eventually they did the right thing, for the kids if not for themselves.

Yes, it was New England in 1965, America's psychic center of white whimsy.

But the enchanted "Moonrise Kingdom" is no more.  A giant "storm" came along and washed it all away....

Yep, that's pretty much how you would do it, if you were inclined to do so.

Moonrise Kingdom is so well crafted and so profoundly sweet that one feels guilty offering any critical account of it whatsoever--suddenly you're the grinch shitting in a kid's toy box.  A timeless account of "first love" and childhood innocence--who could ever be against that?   Don't get me wrong, I actually enjoyed Moonrise Kingdom.  How could I not, I was raised white and middle-class (Wes Anderson films as a whole, after all, are Number 10 on the Stuff White People Like blog).  Plus it has Bill Murray in it, and Bill Murray's very existence--even when glimpsed fleetingly as in this film--somehow keeps even the most whimsy-filled balloon from floating all the way up to a cream-cheese moon (in fact, I'm sure if Murray somehow miraculously showed up in Triumph of the Will, at a podium even, I'd find a way to justify it).  And while Anderson remains stubbornly committed to symmetrical framing, wide-angle distortion, clipped dialogue, and flattened affect, at least it presents a conscious stylistic choice in a commercial cinema that now usually vacillates between the laziness of basic coverage and the flying eye of the CGI.

So let me say up front, I'm not "against" Moonrise Kingdom.  But I am suspicious of it, just as I would be of anything hyped as "timeless" and "universal" in its story concerns.  Because Moonrise Kingdom is in fact very mindful of time, the mid-sixties to be exact, and for that matter, rather narrow in its demo on both sides of the screen.

Is it fair to criticize Moonrise Kingdom for having unrelenting faith in the magic of bygone whiteness?  Maybe yes, maybe no.  Wes Anderson, or anyone else for that matter, certainly has the right to make a period piece about white people living in a milieu that was, for all practical purposes, all white (although you might suspect that two lawyers with four kids living in a huge old house on an exclusive island in 1965 might have at least one "domestic" on hand).  The argument here is certainly not that Anderson/Coppola should have added a Khaki scout of color to the troop's patrol, a quota solution to the (white) discomforts of race and representation that always flirts with the ludicrous.

Here's the question: can we afford whimsy right now, especially a whimsy born of a nostalgia for the era "before the great storm" wiped out, or at least marginalized, all the polite, literate, sensitive, ingenious white kids who white people fantasize were thriving once upon a time?  "Moonrise Kingdom," the magical cove, must get washed away because that's the logic of adult nostalgia, you can't go back to that first crush, a first love, or lost childhood adventures.  But when nestled within this larger island of quirky white people, the passing of Moonrise Kingdom implies a loss of social innocence as well, a caesura before America's growing racial, cultural, and technological diversity would transform Franny and Zooey into Snooki and the Situation.  There is the troubling sense in this film that white America was and is ever more whimsical the more it is cut-off from the surrounding social world, in this case on an island, in a hurricane, now lost in time.

Such liminal states are crucial to children's fiction, of course, which is a major if not defining template for Moonrise Kingdom (and Anderson's films more generally).  But in this context, the regressive journey to an adult world ruled by the logic of children makes the segregationist aspects of this fantasy that much more palpable.  The "magic Negro," after all, only becomes "magic" by coming into proximity with a white person.  The whimsy and magic of Moonrise Kingdom, on the other hand, has a Peter Pan in exile feel to it, not so much as a refusal to grow up, but as a reluctance to take the ferry over to Boston or New York or someplace else where kids haven't built treehouses in over a century.

Anderson's preoccupation with precocious families often draws comparisons with Salinger, and The Royal Tenenbaums might well be as close as anyone will come to a bonus Salinger novel, albeit refracted through the multi-protagonist structure and detached humor endemic to recent U.S. art cinema.  But when Salinger's dramatis personae collide with the tone of Roald Dahl, as in Moonrise Kingdom, it has the odd effect of draining both authors of their respective undertows.  White America's nostalgia for the days when every white kid had to read A Catcher in the Rye has, oddly enough, transformed the rather dark postwar anomie lurking in and around Holden Caulfield into a type of timeless teen awkwardness--who wasn't a little weird as an adolescent, am I right?  And while Dahl's whimsy created a magical chocolate factory (and a fantastic Mr. Fox), it was also a place where desire very well might kill you.  Moonrise Kingdom, meanwhile, remains wholly untouched by Salinger's neurotic existentialism or Dahl's ability to highjack whimsy in service of something more sinister.   Sure, a dog gets an arrow through his neck in Moonrise Kingdom (seemingly for the sole purpose of setting up the film's best one-liner), but such sadness is hardly on a par with "A Perfect Day for Banana Fish."  And while "Suzy's" troubled bookishness may have an antecedent in the aforementioned Zooey, I doubt we will ever see The Bell Jar-esque sequel where she's at Smith in the 1970s, gingerly testing razor to wrist after reading Being and Nothingness.


No one wants to see Bill Murray as Seymour Glass, blowing his brains out in the last reel (much funnier that he expresses his marital frustrations by getting drunk and chopping down a tree).  But this Dahl v. Salinger conflict does raise a central question: Is Moonrise Kingdom a mature movie for little kids, or a childish movie for adults?  And what are the implications of that ambivalence?  No one, certainly, is going to begrudge children a little whimsy here and there. On the other hand, if this is a film primarily for adults (as it seems to be--it certainly isn't being marketed as The Fantastic Mr. Fox, Part II), then its fantasy of white isolation on boy island becomes a bit more troubling.

Most children eventually give up the whimsical for the tragicomic, a subtle shift from weightless wonder to the crushingly unpredictable absurdities, high and low, that define the less insulated realities of adult life.  Moonrise Kingdom seems either unable or unwilling to cross that line--thus the confusion.

Is it the fantasy of a twelve-year-old boy, Sam Shakusky in fact, imagining the freedoms and competencies he will enjoy after puberty, especially with slightly older and for now inaccessible junior high school girls?  Imagine for a moment if Sam was even an iota closer to Suzy in apparent age--Moonrise Kingdom would suddenly become Badlands. Shakusky's boner notwithstanding, or perhaps standing, but not with any carnal intent beyond some innocent cuddling, Moonrise Kingdom's tone would be impossible from any other perspective than waning boyhood latency (thus the army of uniformed boys--all the way up to Harvey Keitel-- and the one, lone, tall girl. I don't know what the movie would be like if it centered on Suzy, or a girly pack of Bluebirds, but it sure wouldn't be this movie).
Or is Moonrise Kingdom, more perversely, another early hallucination in a boomer-drenched culture that, now flirting with senility, wants to return once again to the 1960s, but not the 1960s in which "revolutionary" white boomers once fancied themselves the heroes, but the earlier, "nicer" 1960s that older, now more conservative white boomers bemoan having fucked up for themselves?   Ah, to live on a rustic island...an island with no roads, but well-stocked with good books and classic music, be it Britten or Hank, an island where kids wrote letters, played board games, painted portraits-- an island  with cute ye-ye but no shaggy Beatles, Hullabaloos but no Woodstocks, snuggling but no sex, scouts but no gangs, liquor but no pot, Indian trails but no Indians, precocious white kids but no.....

Has every (white) generation now internalized the narrative that the sixties were a "mistake," the threshold of declension rather than the once celebrated vanguard of liberation? This was the explicit dynamic in last season's Mad Men (#123 on SWPL),  as fans of all ages despaired watching Don Draper begin his fall from coolest patriarch in the world to uptight fuddy duddy (and where everyone assumed that Dawn, the new African-American secretary, simply HAD to figure in some type of racially charged plot line that, by implication, would only further disrupt Don's crumbling paradise, a move that would have reduced Dawn to an unwelcome narrative complication in every sense of the term).  Taken together, Mad Men and Moonrise Kingdom seem to endorse a similar premise: (white) America starts turning to shit sometime in 1966.  At the risk of crapping in the toy box a final time, it is worth noting that Moonrise Kingdom's Hullabaloo hurricane hits just two weeks after the Watts riots, and only a few months before Megan Draper culturally emasculates Don by forcing him to listen to that acid nightmare, "Tomorrow Never Knows."  Moonrise Kingdom can only remain magical, whimsical, and timeless by thoroughly extricating itself from this messier social world on the mainland, wistfully stopping the clock before the real hurricane hits.