Anyone Else Enjoy "Bad Ronald?" 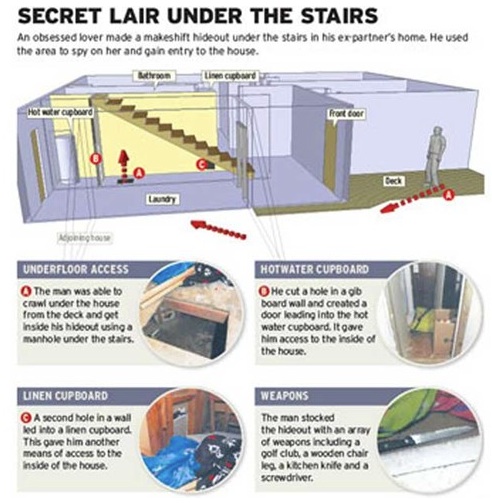 An obsessed lover built a hideout inside his ex-partner's house and used it to spy on her.

The 25-year-old man - who has name suppression - spent many hours in the hidden cavity, under a flight of stairs, and stocked it with clothes, bedding, food, candles, torches - and an arsenal of weapons.

He also cut holes in the plasterboard of the hideout and created trapdoors, giving him access to the whole house.

He was caught after he emerged from the hiding spot and lashed out with a spade when another man visited his former partner at the Lower Hutt home about 3am on April 1.

Police arrested him later that day after he was found hiding under the home in Epuni. He was taken to hospital with bite wounds after a police dog was sent to help flush him out.

In Wellington District Court this week, Judge Peter Hobbs sentenced the man to three years and seven months' jail on 10 charges that included aggravated burglary, assault with a weapon, threatening to kill, assault on a woman, wilful trespass, being unlawfully in a building and wilful damage.

The judge said the man wasn't the first to become "unhinged and obsessed" after a breakup but the offending was premeditated and "completely inappropriate".

He took into account the man's guilty plea, remorse and mental health issues when deciding his sentence. "It appears you are a man of some promise and this offending resulted largely from an emotional breakdown and an addiction to methamphetamine.

The Dominion Post can reveal details from the summary of facts after an order suppressing aspects of the case was lifted.

It outlines a trail of violent domestic incidents in which the man punched and kicked his ex-partner. The couple broke up on March 22 and the ex-partner stayed with family and friends because she was too scared to stay at the home alone.

Three days later the man was found at the home and lashed out again. Police barred him from the home for two years.

On the day his hiding place was discovered, his ex-girlfriend was talking to a man in a lounge upstairs. The pair heard a noise on the porch and, when they investigated, found an old envelope with a note that read: "He has three min to leave or me & Charlz be bak". The ex-partner went through the home locking all the doors and windows. A wardrobe was not shut in her daughter's bedroom and, as she began to close the doors, she saw her ex-lover standing in the wardrobe holding a garden spade.
He chased her outside and yelled to the other man: "I'm gonna f...... kill you." He fled after the spade was wrestled from him.

Police and the woman returned to the home later the same day to search it.

They could not open the front door, found a sheet covering the window, another window broken and a wall unit damaged at the rear of the home.

The man was found hiding under the house. "While searching the address, police found a small area in the wall space where the defendant had food, clothing, torches, candles and bedding items," the police summary says.

"The defendant had weapons hidden in the wall space, including a metal golf club, a wooden chair leg, a kitchen knife and a screwdriver."

He could access the area via a manhole underneath the home.

Detective Senior Sergeant Scott Cooper said police believed they had foiled either a kidnapping or a serious attack. "It's that whole obsessive nature of this incident, which was quite concerning and scary.

"Why was he there and what was he going to do? [We] believe he was gearing up to maybe kidnap her - for what reasons we don't know."

However, at court, the man's tearful ex-partner, who is about five months' pregnant with his child, said: "I know he wouldn't have hurt me - I know for a fact - and I don't believe he was down there for very long.

Mr Cooper said it was not unusual for victims of domestic violence to play down the severity of incidents because they still had feelings for the people who had abused them. "This is probably one of the biggest barriers to [dealing with] domestic violence.

"Complainants or victims continue to justify the actions of perpetrators."

The man's father said the incident was totally out of character. "I think it was a one-off . . . and I think that fort was only built on the day. When the cops showed up, he tried to find a place to hide.