It's been a grisly few weeks on the North American continent.  First, Miami police shot and killed a man who---hopped up on the newest terror drug ("bath salts?"---Calgon, fuck me up!)---stripped down nude, tackled a homeless man on the side of a freeway, and ate his face.  "Ate his face" is not a euphemism, and I implore you not to google this event as some yahoo has in fact leaked the ER photos and they will destroy you (although a Miami TV station has reported, in a form of obsessive fact-checking or maybe demented consolation that no "human flesh" was actually found in the attacker's stomach--I guess that means Rudy Eugene, the now dead assailant, was merely a bulimic face-chewer and not an actual cannibal, so there's that).
In Baltimore, meanwhile, Alexander Kinyua allegedly killed his roommate and then "gorged" on the heart and brain, leading to the inevitable paper and pixel-trail at his university where individuals expressed amazement that Kinyua hadn't been institutionalized months ago. Apparently he beat someone half-blind with a baseball bat within the last two months and yet continued to walk the streets a free man (wearing face paint and extolling the virtues of "human sacrifice," no less).

All of this is horrible, of course, even as it is hilarious.  And by "hilarious," I mean these various atrocities--arriving in a media-friendly packet of three--have led to a great deal of gallows humor on radio and late-night television (and presumably, daily conversation).  And who could resist?  Personally, I feel especially bad for the story editor at the just cancelled CSI: Miami.   How sad for the writers that they won't get to run lines for Caruso's patented sunglasses routine in what would have been the inevitable "face-eating" episode's cold open. 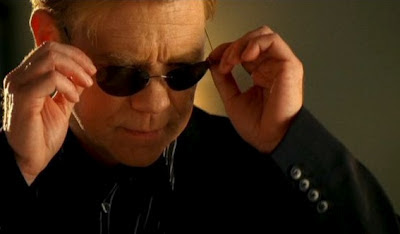 It's time we faced the facts....there's a new killer on the streets of Miami

We need our own face-off...with the bath-salt zombies threatening to destroy this city.

Defacing our city's property is one thing...but defacing its citizens will not stand.


If we accept Freud's contention that all jokes are about either sex or violence, it is understandable that such atrocities would generate a fair amount of queasy humor.  Here are three horror stories that need to be dissipated through a type of masscult bravado.  The U.S. (and now Canada!) is one screwed up place, but that's okay, I can take it.  Whaddya gonna do?  Some days you get the face-eating zombie, some days the face-eating zombie gets you.  And, like all other momentarily shocking news in this century, this trio of atrocities will no doubt soon fade from consciousness.   Eating a fellow human being's face is now roughly equivalent, in news value, to an errant drone strike or a successful celebrity insemination. Speaking of which, isn't Jennifer Aniston due soon?

Much of this is linked to the rather giddy untethering of reality that, while not caused by the "media," certainly benefits from the relentless quest to turn an act of unspeakable horror into a timely Facebook post or a clever tweet.  Even the otherwise sober Center for Disease Control got into the act by issuing a press release in the wake of Eugene's "zombie-like" attack.  On June 4th, the  CDC announced it  "does not know of a virus or condition that would reanimate the dead (or one that would present zombie-like symptoms).”  More evidence that the west secretly yearns for the zombie apocalypse to set us all free.  Alas, it is not to be....yet.

How different from the atrocities of old!  Time was when America produced weighty psychopaths worthy of true dread and respect.  Consider the incredible run of gold-standard deviancy from 1969 to 1991: Manson, Bundy, the Zodiac, Lucas, Rodriquez, Son of Sam, Gacy, Dahmer--individuals so thoroughly dedicated to their craft that each has achieved the highest of popcult honors: single-name status.  On the crazy religion front, meanwhile, Jim Jones was so completely absorbed in an evil world of his own design that he actually convinced over 800 people to relocate in Guyana and then commit mass suicide.

The feeble uptick in cannibalistic activity over the past couple of weeks actually evokes an interesting sociological mystery: why have there been so few spectacularly deviant criminals over the past twenty years or so?  Eugene, Magnotta, and Kinyua are in some ways a mini-return of the major repressed, evoking this earlier era of storied insanity even as their crimes are of a different order, more fleeting and ultimately forgettable.

A few theories come to mind: (1). law enforcement has gotten much better at catching serial killers early in their "careers"; (2). serial killers and other fabled psychopaths still exist, but the structure of fascination that once herded them to the cultural center has for the most part disappeared; (3). the unique sociological cocktail that produced so many prolific maniacs in the 70s and 80s has changed. Perhaps the current dearth of committed psychopaths is the product of all three of these conditions.

One thing's for sure--this new breed of cannibalistic psychopath just isn't up to the standards set by Manson, Gacy, Dahmer and their peers  (once again the millennials fail their boomer overlords).  Rudy Eugene ate a face, to be sure, but consider this: Dahmer ate multiple body parts and kept spare organs in the refrigerator.  Plus, Eugene had to ingest a psychosis-inducing PCP-accelerant in order to commit his "zombie" attack.  Dahmer, on the other hand, actually experimented with various chemicals injected into the trepanned skull of a half-dead victim in an attempt to create his own personal zombie--a companion/sex slave that would remain under his total control.  And he did so, apparently, with little help beyond some pot, beer, and his own strain of bad brain chemistry.

Then there is Magnotta, the Canadian Internet snuff killer.  His glam shots, on-line torture video, and postal theatrics suggest, not a true psychopath, but a misguided reality show contestant posing as a psychopath.  This is in stark contrast to someone like Gacy who, true to his Polish working-class roots, murdered and buried over thirty victims in his suburban Chicago basement without wanting or attracting any god damned attention at all, driven solely by a psychosexual depravity so pure that it simply would not be denied.  Magnotta, on the other hand, seems to have taken a wrong turn in "branding" his career as a media icon.  Again, he was apprehended in Berlin "googling" his own videos, images, and news updates.  Classic.  In another world, he'd be Puck on The Real World: Montreal, the little fame-whore. 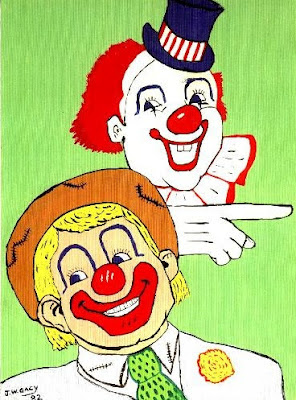 If you have ever owned a record by Big Black or Throbbing Gristle, or if you can identify the artist of the painting to the left, you may well remember that odd off-shoot of alternative-underground-post-punk culture in the 80s/90s that engaged in a prolonged and allegedly tasteless "celebration" of America's most notorious psychopaths--what might be called, for lack of a better term, the "Deathtrip" scene (after "transgressive cinema" Richard Kern's "production company").  Oil paintings by Gacy, circulating after his arrest, skyrocketed in value during his time on death row and continue to appreciate in value even today.  Gacy's portraits of clowns, Disney characters, and random celebrities remain the ne plus ultra of this art brutal movement in their unnerving ability to evoke the distinctly American profile of the deranged serial killer (yes, Jack the Ripper invented the form at the dawn of modernity--if we exclude the unknowable sex/death economy of the Gilles de Rais--but only in America could someone become so functionally sick as to supervise a thriving construction business, operate a teen abbatoir in the basement, and still find time to put brush to canvas and render some truly stunning clown-kitsch.

Around the same time, an enterprising comic company began a series of "Psycho Killer" titles, debuting with Big Daddy Manson himself, a figure who, though low in "body count," nevertheless remains America's favorite face of evil incarnate (and still responsible for a good 10% of MSNBC's "doc-block" revenue stream).  Manson has remained a presence in American life for many reasons, but much of his allure no doubt stems from his own ability to play the I'll be your mirror card so effectively.  Consider the following gems of Manson wisdom: 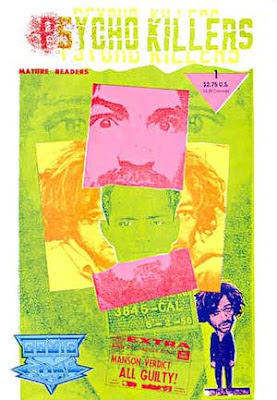 "I can't dislike you, but I will say this to you: you haven't got long before you are all going to kill yourselves, because you are all crazy. And you can project it back at me, but I am only what lives inside each and every one of you."

“You know, a long time ago being crazy meant something. Nowadays everybody's crazy.”

Cult leaders are said to be very good at getting inside their disciples' heads--clearly Manson has endured in his ability to serve as a dirt-scrabbled sage of psychosis, a kind of witchy Will Rogers.  Manson's identity as the coffin-nail in hippiedom didn't hurt either, especially in aligning him with the sixties backlash in early 80s deathtrip culture (Kern's video for "Death Valley '69," in which members of Sonic Youth re-enact the "Family's" desert depravity and horrorshow slaughter is a benchmark of the Deathtrip scene).

Perhaps the most sickly ironic and ironically sick item of this era was a set of "Death Cult" trading cards commissioned to document the Jonestown Massacre.  Like the Psycho Killer comics, the Death Cult cards married psycho-depravity with a cherished icon of American childhood--the bubblegum card.  What better way to signal the fundamentally American sickness of messianic violence than to equate Manson's powers with Superman, or to approach the mass suicide in Guyana as a crucially meaningful event worthy of recounting as a type of perverse passion play?

Gacy paintings, psychokiller comics, and Jonestown trading cards are all dripping with dark irony, of course, and while the "deathtrip" scene has for the most part vanished, it was undoubtedly a central pillar in the great irony panic of the nineties.   It is easy to dismiss this particular constellation of pop nihilism as a form of glib, amoral posturing--ungrounded irony at its worst.  But there was a certain political project in these artifacts, a sympathetic echo of George Bataille's fascination earlier in the century in exploring the threshold of the "human" through moments of psychotic violence, "irrational" behaviors, and most famously, Aztec blood sacrifices.  Deathtrip scene-sters probably did not have such lofty philosophical ambitions--but figures like Manson, Gacy, and Jones were certainly "esteemed" inasmuch as they seemed to define the abject threshold of the American experience, each a "symptom" erupting so spectacularly that he could not be re-repressed.

And this power continues even today.  Who could forget Republican Presidential candidate Michelle Bachman's classic blunder of displacement last fall when she confused John Wayne Gacy with John Wayne (believing Waterloo, Iowa to be the Duke's hometown, when in fact it is where Gacy grew up and eventually opened a KFC)?  Quite frankly, it made me a little nostalgic, ready to put on my old black combat boots and crank up some Nurse with Wound.  And I think it had a similar impact on artist Dan Lacey, who commemorated the gaffe in his recent painting, "The Spirit of Waterloo." 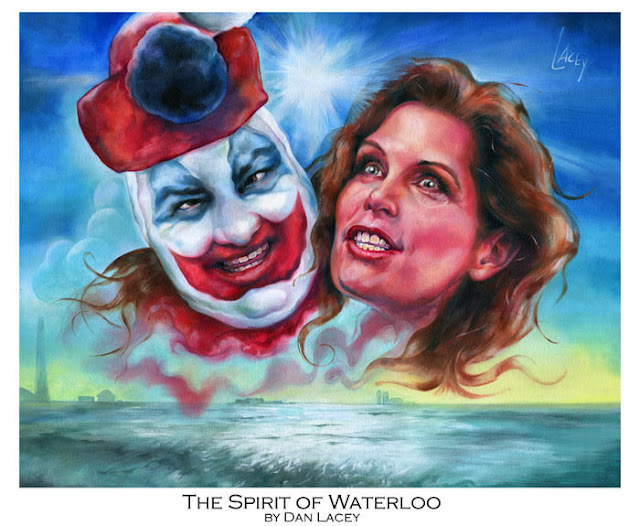 Yes, compared to the mythic import of Manson, Gacy, Jones, Dahmer, etc., this recent outbreak of would-be cannibal provocateurs is fairly insignificant and no doubt will soon be forgotten.

But Deathtrippers should not lose hope--inexplicable psychopathology is still out there if you're willing to seek it out.  For example, just last week, presumptive Republican Presidential candidate Mitt Romney attended a fund-raiser at the home of Dallas billionaire Harlan Crow.  Romney and several mega-rich supporters of the GOP ate dinner in a room filled with Crow's personal collection of paintings by Adolf Hitler.   And there was no irony involved whatsoever.

Now that is truly twisted.