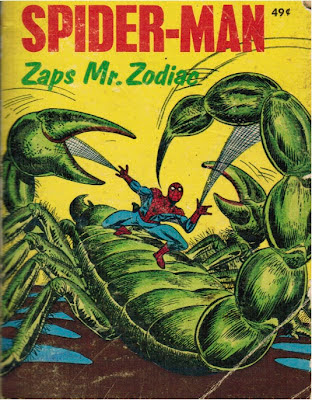 Remember a few months ago when U2 was trying to stage Spiderman as a musical and burned down that deli at Broadway and 43rd?  For a while there, Spiderman: Turn Off the Dark was really making a bid to become the Macbeth of synergistic mediocrity.  Quite frankly, I'm not sure if the show ever did officially open.  I know Glenn Beck was a big fan during the previews, which is just the type of endorsement I'm sure a New York theater company relishes receiving ("Beloved by the nation's biggest dimwit!").  Whenever I imagine the production in my mind, all I can see is the "Night-man vs. Day-man" number from It's Always Sunny in Philadelphia--but then again, that's my relationship to most musical theater.

One of the ongoing difficulties with Spiderman: Turn Off the Dark (other than that title) was getting the "book" just right.  Various "spidermen" falling into the orchestra pit was a problem, obviously, but so too was the plot and pacing of the overall story.  After all, when the time comes for the Turn Off the Dark revival in 2074, it will need to be a "classic" of the ages and not just a symptom of a regressed moment in U.S. cultural history when nobody would see or listen to anything that they didn't already know by heart, preferably from the age of 8.  This quest to perfect the book is astounding, I think, given that there must already be around a thousand or so "Spiderman" stories circulating out there just waiting to be pilfered, hybridized, and otherwise re-purposed.  If Micheal Bay can generate eight hours of cinema from little more than a toy commercial, how hard could it be to get 3 hours of theater out of a million comic books?

Everyone involved here could have saved a great deal of trouble by simply adapting Spider-Man Zaps Mr. Zodiac, a 1976 title in Whitman's "Big Little Book" series.  Based in Racine, Wisconsin, Whitman has published an astonishing number of kids books since their founding in 1919.  In the thirties and forties, they placed Hollywood stars in adventures aimed at little girls (such as Betty Grable in the House of Cobwebs and Jane Withers and the Swamp Wizard).  The sixties and seventies saw colorful, easy-to-read books based on kid-friendly television shows (my favorite and a thrift store staple--"Killer Lion" in the Bonanza series.  I haven't read it, but I always enjoy imagining Hoss and Little Joe getting their chaps ventilated by an African lion that somehow got loose on the Ponderosa). 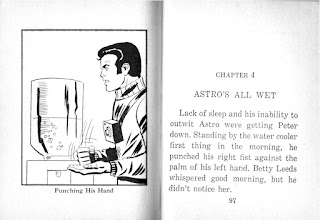 The "Big Little Book" series goes back at least to the 1930s, and appears designed to ween little kids from comics to "story" books proper.  Each title is over 200 pages in a 4" by 5" format, nice and thick so that junior could feel like s/he was reading a grown-up book but also profusely illustrated so that junior doesn't get bored with all the words. Every title I've seen has a picture every other page, giving the books an impressive text to picture ratio of 1:1. This no doubt presented quite a challenge to the artists at Whitman, who had to find something, anything, worthy of illustration on every single page. For example, in Spiderman Zaps Mr. Zodiac (henceforth, SMZMZ), one chapter opens with Peter Parker still mad that the supervillan escaped his grasp the night before. "Standing by the water cooler first thing in the morning, he punched his right fist against the palm of his left hand," reads the text.  As this is really the only thing that happens in this 2-page spread, the illustrator dutifully brings this crucial plot point to life, complete with the caption: "Punching His Hand." 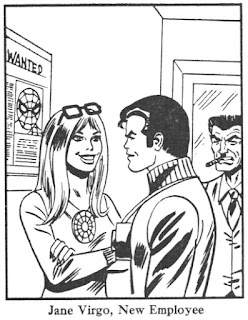 This relentless volley between text and picture makes almost every Big Little Book a fertile source for popular surrealism--but I believe Spider-Man Zaps Mr. Zodiac is particularly dazzling in its weird illogic and thus ripe for musical adaptation. If only Bono and the Edge had the courage to be slightly less ambitious, SMZMZ would be the perfect skeleton on which to drape a few slightly reworked entries from the U2 back catalog. 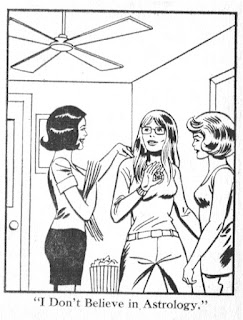 As we open, the hapless Peter Parker is getting a tongue-lashing from his boss for failing, once again, to snap a decent photo of the new supervillain menacing the city.  We then meet "Jane Virgo," whom the newspaper has just hired to write the daily astrology column.  "Jane" is an emblem of mid-seventies "with-it" feminism worthy of a time capsule: straight hair, "intellectual" glasses, a giant astrology pendant around her neck.  She gets up in Parker's face like a feature writer at Ms., just waiting for him to say something sexist so she can knee him right in the spidey sac.

To make sure we get the point that Jane is "trouble," the writers even have her temporarily waylaid by the other women in the office for a catty little hissing fit just outside of Parker's hearing.   I don't know the
Spiderman storyworld all that well, but I'm assuming "Betsy" (with the black flip at right) is Parker's "authorized" love interest.  In any case, after Jane meets Peter, Betsy and another woman playfully welcome their new co-worker by announcing they "don't believe in astrology."  Betsy even gives Jane a little poke in the shoulder as she dismisses her expertise as complete and utter nonsense.  Welcome aboard, astrology bitch, now stay away from Peter or you'll REALLY being seeing stars.  In a book aimed at 10 year-old boys, this is as close to a full-on cat-fight as is possible.  Extra points, also, to the artist for his or her rendering of the life-like zombie negligee model at the right side of the frame). 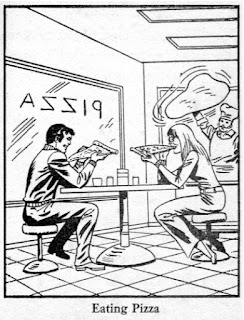 But Jane doesn't butt out.  Instead, she asks--nay, demands-- that Peter Parker take her out to lunch--thus recapitulating her fundamental sluttiness.  The pair take off for a nearby pizzeria, and in a nice bit of casual surrealism, chow down on two of the most gigantic pieces of pizza pie ever dished out on the island of Manhattan. If we extrapolate from the curvature of the crust, as drawn, I think we are looking at a pie somewhere between four to five feet in diameter--a freakish stunt pizza of some sort, perhaps whipped up on a dare, or maybe as the centerpiece for some local charity event.  In any case, no human being would ever produce and/or consume a slice that huge under standard market conditions.

At any rate, after eating their 5000 calorie carbo-slabs, Peter and Jane go back to work.  More yelling at Peter, both by his boss and by Betsy.  Then Jane announces she must rush back to her rented home on Long Island. What follows is a sequence so totally unexpected that it instantly elevates SMZMZ into the pantheon of pop oddities.

At home, Jane begins to meditate in the middle of an astrological circle (below left).  Fine, nothing wrong with that, although Jane's hippie-scowl does have somewhat of a J.T. Chick vibe to it.  The image seamlessly links Jane's feminism, astrology, and flaunting of courtship customs with the equally unwholesome activity of yogic meditation.  It is a "lifestyle" combination that we know can not possibly remain validated in the pages of normalizing kid fiction.  Jane has a dirty little hippie secret, of that we can be sure.

We turn the page.  Zounds!  It's worse than we could have ever imagined.  Jane Virgo is transforming into, not just a supervillan, but THE supervillan.  Satan.  Lucifer.  The Devil.  The Prince of Darkness-- horned, hooved, pendanted!  "A Weird Change" indeed, as the caption informs us. Now, if I had been a ten-year-old kid in 1976, I would have considered this 49 cents well spent.  Here I am expecting just another lame Spiderman story with him fighting Dr. Whatsit or the Purple Palooka; instead, a sympathetic editor at Whitman is going to let me realize the dream of finally seeing The Exorcist, that really scary film that my parents absolutely would not allow me to watch three years earlier.  This is going to be beyond awesome.

And here, I think, we would insert our first show-stopping production number of the evening.  Imagine a hundred dancers on stage, oiled-up in speedos and brandishing stylized goat heads, circling around Jane with sparklers as she makes her transformation into "an enormous mountain goat."  A laser projects a kaleidoscope of zodiac signs out into the audience.  The music?  I'm thinking U2's classic anthem of spiritual searching, "I Still Haven't Found What I'm Looking For."

Adults can sing along.  Little kids can shit their pants.  The gift shop can sell T-Shirts and "Big Gulp" cups emblazoned with the fearsome goat--perhaps as a lenticular that shows us the entire transformation as we angle it in the light.  Come on, U2, it's not like this is rocket science.  Asses in the seats, dollars out of the wallets.

In part 2 we will discuss how Jane Virgo acquired the power to transform into a demonic mountain goat.  It's a humdinger and a perfect opportunity to re-purpose "Sunday Bloody Sunday."
Email Post
Labels: Animal Kingdom Comics Commerce Deadish Media Popular Sublime Regressive Phenomena Valuable Advice to the Culture Industries