I Want My Tiger TV 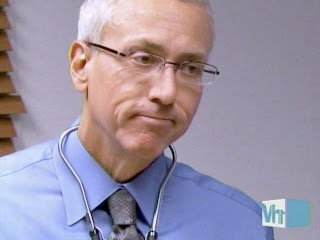 After SNL runs in my market, the local station here programs a deluxe weekend edition of one of those Inside Hollywood Entertainment Access Starf#@ker Tonight shows—your source for the latest on who was seen canoodling whom on the set of what, or how the cast of Chuck is doing its part to combat webbed-toe syndrome, or where the stars are currently going to treat their mutated tea-cup poodles to saffron colonics.   Predictably, this week featured a special “all-Tiger” edition of the program, complete with a “roundtable” of fame-parasites discussing the various implications of the unfolding “scandal.”
And there at the middle of this Yalta for Yahoos was Dr. Drew Pinsky, vomiting up his expertise with the zeal of an ambulance-chasing lawyer writhing ecstatically in the viscera of a multi-car pile-up.  Yes, that “Dr. Drew”—former straight-man for Adam Corolla, host of Celebrity Rehab, and current “go-to” guy on the psychology of celebrities and celebrity culture.  “I am very concerned about the state of Tiger’s mind right now,” he offered.  “A suicide attempt is not out of the question.”  Later Pinsky was calling for an “intervention.”  He needs to be ambushed by his loved ones, confronted with his “addiction,” and whisked off to rehab.  Or so claimed the “gee-I-just-happen-to-run-a-celebrity-rehab-clinic-on-TV” Pinksy, all with great solemnity.
Like most of us, Dr. Drew probably wasn’t born evil.  He went into the healing arts, after all, and Loveline—while a little creepy—probably prevents at least a few kids from getting pregnant or catching a dose.  But apparently that wasn’t enough airtime for Pinsky—he needed more.  But how?  An average-looking guy with a decent enough gig and yet probably not the second-coming of Freud—how to stay afloat in a world where you are only as valid as your latest Q-score?

And that’s when he crossed over to the dark side, willing to diagnosis almost any celebrity kerfuffle based on little more than a cheat sheet compiled by TMZ interns.  Once you are on the set of Inside Hollywood Entertainment Access Starf#@ker Tonight pretending to care about the emotional welfare of someone you have never met, some part of your soul must be dead.  At least the reactionary wing-nuts in Congress who “diagnosed” Terry Schaivo via videotape could fall back on a certain moral absolutism—any human biological system still engaged in some form of metabolic activity must be kept alive no matter what.  I don’t agree, but hey, I can at least have some respect for the purity of the position.  Pinsky’s involvement with Woods, on the other hand, like his “consultation” on so many high-profile meltdowns, has no real value beyond keeping the Pinksy brand-name out there in the public.

His latest book, The Mirror Effect: How Celebrity Culture is Seducing America, argues that celebrities are predisposed to Narcissistic Personality Disorder, and that celebrity culture in turn is having a negative impact on what passes for “normal” behavior in the non-celebrity world.   This is a reasonable, maybe even obvious thesis, one crafted to confirm everyone’s vengeful suspicions about celebrity  (they are all narcissists, I knew it!).  But weirdly, given its subject matter, the book still assumes there is any shame attached to being a narcissist.  A more likely reading, at least among the fame-obsessed dolts Pinsky professes we should be helping, is to regard narcissism as a positive quality inasmuch as it is a reliable predictor of future fame!


More to the point, how does Pinsky reconcile this sweeping cultural diagnosis with his own efforts to build a massively visible entertainment empire based on indulging the “unique” status and “special” problems of celebrities?  If pressed, no doubt Pinsky and the producers of Celebrity Rehab would argue they are using the fame-hook to educate normal-folk on how rehab actually works, perhaps as a way to demystify and thus encourage therapeutic intervention for the common Joe.  But in their heart of hearts they must know they are simply contributing to very same social pathology that finds the problems of (former) “stars” inherently more important and interesting than those of everyday idiots.  Laid-off, on S.S.I., and huffin’ glue in Detroit?  You are a social statistic no one cares about.   Former cast member of Wings addicted to poppers and cruising she-male hookers on Sunset—let’s see if we can’t keep him around for two seasons!  The only thing worse would be blaming the problems of celebrities on the public itself… 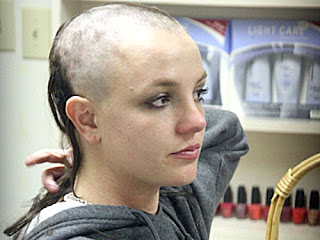 Oh wait, he’s done that too.  When Britney Spears was going through her head-shaving troubles, Pinsky told us that was “our” fault—that our willingness to consume Britney train-wreck media only created more of it, and so we should hang our heads in shame (just as long as we kept consuming his celebrity “train-wreck” product line).  It almost makes me feel bad for all those letters I wrote to Inside Hollywood Entertainment Access Starf#@ker Tonight demanding they send more correspondents out into the field to further humiliate Britney.  Damn me and my structural relationship to markets operating according to representational economies I have no control over—I need an intervention!

Let’s get this straight: we don’t need less Tiger coverage.  If anything, we need more of it.  I hope there are photos of him in flagrante delicto wearing that stupid green Master’s jacket.  I hope we find out he had a string of anal-beads made from golf-balls used in his grand-slam victories.  I hope the divorce papers reveal he keeps a real tiger in his basement to chase him around the house to psyche up for big matches, just for the Caligula-like insanity of it all.  It’s not like Tiger and his family are “real” people subject to any actual consequences.  He’s a billionaire for bringing basic athletic competence to a sport previously ruled by doughy white guys.  She’s about to be a divorced multi-millionaire who now owns her own island in Sweden and will thus be the most eligible single-mom in Stockholm.  But what about the children, the dear sweet “we-won-the-genetic-and-trust-fund-lottery children?  No worries there.  Those kids will have enough money to either indulge or cure whatever dysfunctions they acquire during the break-up.  They’ll be with Prince and Blanket doing blow in a Swiss ski lodge before you know it.  They will all be fine. 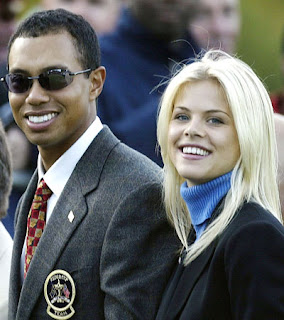 And besides, we all know the deal we have collectively made.  Celebrities are paid handsomely in money and attention for some ridiculous “skill” (acting, golfing, governing) so that, on the off chance they are caught in a more compelling psycho-drama of actual interest to people, they have the necessary resources to endure a few weeks of humiliation.   Quite frankly, I don’t think we’re getting our money’s worth with Tiger.  Look at Tom Cruise.  For the money we pay him, not only do we enjoy an occasional irrational outburst, we also get to imagine him locking his wife and child in a bio-cube every night and forcing them to memorize Dianetics line-by-line.  Those are entertainment dollars well spent.  But serial philandering with Vegas bar trash?  Pfffttt—for the investment we’ve made in Tiger, he really should be doing Gilles de Rais quality work by now.
No, Tiger doesn’t need an intervention—just a divorce, a new P.R. team, and a reminder that it isn’t the quantity of the scandal that counts, but the quality.

And as we reap these tawdry amusements that are so rightfully ours, we certainly do not need Dr. Drew hanging around the set as a bogus “superego,” feigning concern (his and ours) for the traumas and humiliations facing the ultra-privileged--somehow pretending to be part of the “solution” even as he so desperately aspires to be a bigger part of the “problem.”
Email Post
Labels: Celebrity Bullshit Deviants and Delinquents Exploitation Fatal Strategies The TV