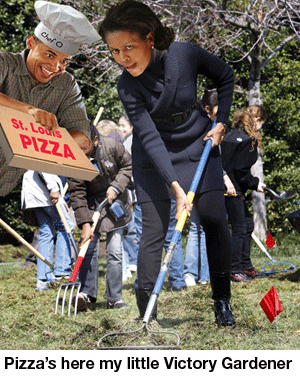 A couple days ago while surfing the web I was directed to an article on RedState.com where this absolutely hilarious cartoon had just been posted. The caption read: Sacrifice? Heck wit dat. I'm eatin' me some pizza. Racist? Absolutely. But I was more struck by the weird attempt to generate outrage from something so trivial. For those who don't know, a pizza chef in St. Louis recently volunteered to stop by the White House and prepare dinner for the Obamas, whom he had met during the campaign. For the right, this somehow translates into Obama eating pizza while Rome (which he ignited a mere two months ago) burns. Given the stupidity of the illustration and the issue, I thought I might drop a quick barb in the comment section to set everyone straight.

This is probably old news to the net-savvy, but it turns out some sites have what might be called a "hothead" cooling off period, meaning if you register for a site to make an incidiary comment, they make you wait 24-hours before having access to the forums. Fine. I made a note to return the next day and show them what's what, less out of allegiance to the left at this point than to make sure their stupid filtering system wouldn't work, at least in this case. When I was finally allowed to play in the RedStates 24 hours later, I tried to take the Kaufman angle, completely agreeing that the Obama administration was the most corrupt in American history (after only two months, no less), writing, "How dare they accept an invitation from a visiting chef to prepare a pizza in the White House. I am sickened, disgusted, and so very very mad."

At that point I was going to bail, but then I saw a thread about Obama's handling of the pirate hostage crisis in Somalia, which was literally schizophrenic in its attempts to criticize everything Obama had or had not done, and everything he might or might not do. They really hate him! To a comment that called Obama a "wuss" for not nuking Somalia in its entirity, I added "3 shots. 3 dead pirates. Why is this post still up?" (so much for Kaufmanesque irony). To a comment that argued, post-snipering, that killing the snipers was not the answer because it would just create more pirates, I added: "Obama + negotiation = wussdom. Obama + killing pirates = more pirates. Obama + (x) = any probability of succcess. Solve for X. Show your work." When another poster noted that Obama had nothing to do with this successful resolution, that it was strictly a military decision and operation, I opined at least Obama didn't dress up as a sniper and try to take credit for it.

Moving on, I saw that someone had posted a link about the government's plan to scrutinize "right wing hate groups" more closely. Of course, everyone in this thread thought they were facing imminent arrest, or more frighteningly, that it was time to stock up on a shitload of guns before the inevitable repeal of the 2nd amendment. To this I added, "Who is more likely to shoot up a McDonalds today? Al Qaeda or a recently unemployed militia member convinced Obama wants to convert the nation to Islam and melt down the nation's AK-47s to build an underground mandatory abortion bunker? If we were in Vegas, the odds wouldn't even be close."

I added a couple more zingers on my way out. Awhile later I returned to see if any of these pithy rejoinders had brought a RedStater to his/her (probably his) senses--instead I received a "601 redigestation error." After a few more attempts to regain access to my new RedState brethern, I realized I had been thrown out, locked out, barred from the site. Redigested, whatever that might mean. So ended my career in political dialogue on the net: 8 comments in 45 minutes = exile.

I share this, not so much to demonstrate my superior BlueState wit (well, maybe a little), but to think about the poor suckers who have to police these sites. Most likely a person who gets a job checking posts for potentially disruptive satire, irony, political leanings, hidden messages, etc. has to be a somewhat literate, textually sensitive individual. What must it be like to be a smart, relatively informed person in charge of protecting extraordinarily stupid chickens from a pack of snarky foxes? In the end, this editorial cop is probably the only one who followed my brief career on RedState.com. I can only hope s/he was amused for a few moments in between deciding whether or not calling the First Lady "H'Obama" is offensive--which it is. Then again, anyone who would censor my airtight logic while allowing "H'Obama" through the gates repeatedly is probably dead inside. Dead and red.
Email Post
Labels: Conventional Politics