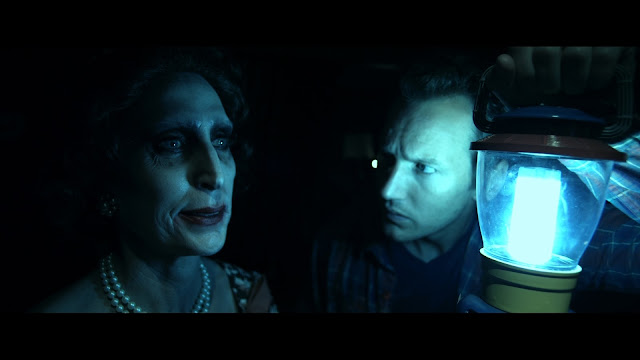 Mystics, philosophers, and theologians have debated this for centuries, but as yet have little to show for it.  For a while great hope was put on a tunnel of light leading to a lost childhood pet, but most now recognize this to be a defensive form of sentimentality triggered by oxygen deprivation.

Happily, a recent motion picture has decided to advance the ball on these metaphysical debates, demonstrating once again that the cinema is the only truly useful machine for imagining what we imagine things that are unimaginable might be like.

The movie in question is Insidious (2010), part of the recently resurgent cycle of supernatural horror films now haunting the world's cineplexes and Netflix queues.

Insidious itself begins with a rather existential question of film-making: How does one make a "fictional" supernatural horror picture after the Paranormal Activity series has so thoroughly rewritten the genre's reality-effects in the video language of actuality and surveillance?  The Paranormal Activity films are a symbolic homecoming for ghosts everywhere, a recognition that any ghost caught on film is fundamentally a trick, a lie, ink in water, a special effect, whereas ghosts caught in the apparently casual sweep of electronic surveillance cameras are the real deal (part of the genius of the PA series is its integration of boring duration in ghost hunting--the ghosts do not magically appear as soon as the Second A.D. hits the clapboard, but instead must be "revealed" by fast-forwarding through hours of "tape" and/or data streams--labor that we are allowed to witness on screen).

During the first half of Insidious, it appears the filmmakers will simply capitulate to copying Paranormal Activity, albeit on better film stock.  There's a family.  There's a house.  There's a vibe.  Things happen.  It's effective as far as young photogenic families menaced by fake ghouls and staged demons go, but after Paranormal Activity, the viewer is left thinking: "Is that all there is to a haunting?  Is that all there is?"

As a momentary misdirect, Insidious moves the action to another house (thus speaking to the true horror of middle-class existence--the family must sell their house "short" just to get away from whatever is bumming out Mom. Here the ghosts become a surrogate for toxic mold or the new neighbors next door unpacking their jet-skis and confederate flags).  Needless to say, the demon brigade follows them to the new home and before we know it the family's young son has lapsed into a mysterious coma. 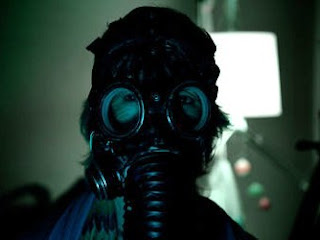 Here the filmmakers put in a call to Poltergeist to secure a psychic-investigator who will be tasked with the narrative responsibility of explaining just what the hell is going on and what might be done about it.  In a nice bit of bonus surrealism, our psychic house-cleaner does her best work while wearing a gas-mask rigged with contact mikes, allowing for a refreshing new take on the obligatory seance scene.

We are told the son is not in a coma, but has instead allowed his "astral body" to wander away during a dream.  The prospects of a vacant meat-bag are so tempting to the wayward ghosties that they are now hovering around the boy's body in the hopes of taking up occupancy. Meanwhile, the boy's "astral body" (or "soul" to the none-psi crowd) is being held captive in "The Further," a sort of limbo where ghosts and demons hang around looking for trouble.  What a mess!

As the world awaits a new Pope, perhaps this is a good time to explore a certain contradiction in Catholic doctrine. If you are an aficionado of popular kitchen art, no doubt you are familiar with the "Guardian angel" genre.  These paintings feature luminous angels trailing after small children, quietly and invisibly making sure little Jack and Jill don't fall into a ravine or ride their bike into traffic or drown in a lake trying to catch a frog. It's comforting, I suppose, and as plausible an explanation as any other for how every child doesn't at some point end up at the bottom of a well.  But Catholics, as I understand it, also believe in demonic possession.  So the dilemma is this:  Where exactly is this guardian angel when the demons are milling around looking for a good body to invade?  Are they on break?  Changing shifts? Do they become so caught up in making sure a reasonably coordinated child can make it across a rickety bridge that they get blind-sided by Blejudicis, prince demon of sassy backtalk and gumball smacking?

Insidious does not necessarily subscribe to Catholic theology; still, it is a very unfair universe in my opinion when a little kid can inadvertently wander around through astral projection, get astral-kidnapped by a demon, and thereby endanger the lease on his terrestrial meat-body.  If there are demons capable of doing this, then those things in the universe that are not demons--angels, sprites, astral social-workers--should really come up with a better plan for astral childcare.

Given that this kid's Guardian angel has apparently taken a powder, it falls on Dad to rescue his son from "The Further."  As it turns out, Dad was also a bit of an astral-wanderer when he was a kid and almost lost his body to the famous Miss Havisham from Dickens' Great Expectations. Here we gain some insight into how men think about how women think about marriage--so devastating is a missed opportunity at holy matrimony that a spurned bride has little choice but to wander through eternity in her trousseau. Not her graduation gown, mind you, nor a lab coat or power pantsuit, but her trousseau.  This is because every woman, no matter what else she accomplishes in life, is primarily motivated by marriage.

At any rate, the decision is made.  Dad will astral-wander his way into "The Further" to find his son.

And here is the bonus material that promises at last to distinguish Insidious from Paranormal Activity. Bound as it is to the CCTV aesthetic, Paranormal Activity has no plausible way of venturing into the beyond.  While the films are tremendous at capturing the vaguely supernatural menace of an errant pool sweeper, they have no ontological authority to pierce the mortal veil and look across into the Other Side.  But a film camera, one unbound by static mounts and lo-fi imaging, portends a mystical journey into the great beyond.

Now here is something strange:  Gas-mask lady puts Dad in a chair to hypnotize him, thus making it easier for him to activate his wandering astral body.  This all goes smoothly, and soon Dad is out of his own body, looking back at himself in the chair (below).

So far so good.  It's a trick as old as Melies and executed well enough.  Dad has left his own building and is now ready to venture out into "the Further." But where and what, exactly, is "The Further" and how do we get there?

Astral-Dad begins his journey.  As his meat-body occupies the foreground in an hypnotic trance,
Astral-Dad walks behind the chair and toward the front door.  Note the small dot of light at the left side of the frame (below).

Astral-Dad gets to the door and reaches toward the light.  It appears to be a lantern.  It is a lantern.  Astral-Dad picks it up and proceeds outside into the blackness of "The Further" (below).

Here we have a question with both formal and metaphysical implications.  Put simply:  Where did this lantern come from?

A thorough review of the footage leading up to this shot has determined that there is no "real" lantern sitting by the real door in the real world--this isn't a case of every material object in reality having an Astral-double in "The Further."  No, some Astral-somebody conveniently put this lantern by the door specifically for use in the Astral world.

Why is a lantern needed?  Turns out "The Further" is a dark, foggy place, or at least large swaths of it are.  Astral-Dad needs a lantern to see his way through the void.  More to the point, a lantern is needed to illuminate Astral-Dad so that we can see him wandering through said void.  We might say, then, that this Astral-lantern has both narrative and stylistic functions--it is an appropriately spooky light source for this spooky world, and necessary as a means of making this narrative space more suspenseful by confining it to a roving pool of light (in other universes, perhaps Astral-Dad takes a flashlight or some of those glowing rave-stick things).  Still...where did this lantern come from?   Within the diegesis, this lantern remains wholly unexplained and thus unmotivated.  It simply "materializes" (albeit immaterially) on the precipice that apparently separates the family living room from the great abyss outside.

What then, finally, does the afterlife look like--or at least that shitty enclave where ghosts and demons hang around waiting to squat someone's soul?   Below I have diagrammed Insidious' conception of "The Further" as best as I can reconstruct it from available textual evidence.  As you can see, "The Further" appears to consist of relatively in tact yet dim suburban homes separated by a great expanse of foggy black voidness. 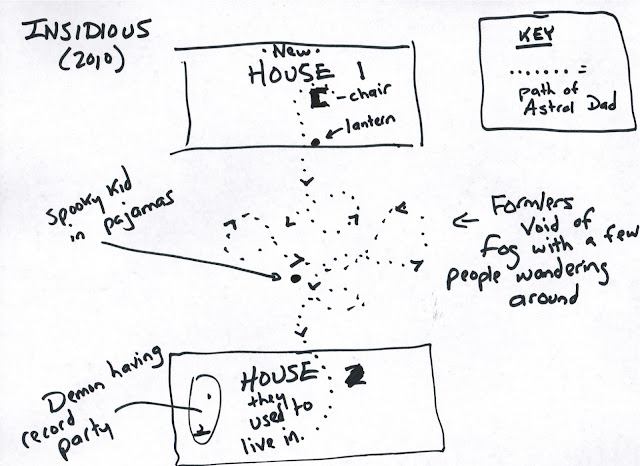 It's just the type of world you might imagine would terrify nuclear-breeder types--family homes as fairly coherent sanctuaries surrounded by the spooky other-dimensionality of the dreaded world outside (one wonders, for example, if Astral-Dad could make a quick side-trip to Astral-Walmart or Astral-McDonalds--or is it really only detached housing that can stand up against the sucking void of limbo?)

No sooner has Astral-Dad left his current domicile than his circuitous wanderings bring him into contact with a kid in pajamas pointing at their old house.  This is where a former member of Gwar is holding the Astral-Son hostage.

Earlier in the movie we saw this demon invisibly stalking meat-dad, a moment immortalized in the .gif at left.  It remains unclear, however, exactly what this make-up is supposed to signify.  He's a hellish demon, I get that, but does his "fire-face" signify the effects of wandering around for centuries in "the Further" or is he simply an enthusiast of all things hellishly awesome?

I think the film privileges the second theory inasmuch as we eventually see this demon primping in front of a mirror, sharpening his nails on a whetstone while listening to "Tip Toe Through the Tulips."  He clearly has a flair for the dramatic.

Before Astral-Dad can have it out with fire demon, however, we first witness a little vignette that explains why the first house was so haunted.  Astral-Dad wanders into his old living room to see a family from the 1940s caught in an eternal hell-loop of repressed ironing that somehow leads to them all getting a shot-gun blast from the lead guitarist in that old Rrriot Girl video from the 1990s that ripped off Dr. Sardonicus.

Later, Astral-Dad sees the entire ironing/shotgun blast family at the top of the stairs, smiling eerily as an ensemble (below).

So there you have it.  Mystery solved. The afterlife is much like the real world.  In fact, the afterlife seems so much like the real world that one has to suspect both are shot on the same set, only in the afterlife all the key lights are knocked out and you have to use a lantern that some Astral-prop master leaves by the door.  Also, ghosts and demons live together in the same cosmic time/space, although the demons apparently have the freedom to walk around and do whatever they want while the ghosts are locked into some type of hellish dinner-theater gig for all eternity.