Take My Gun (From My Cold Dead Hands), Please! 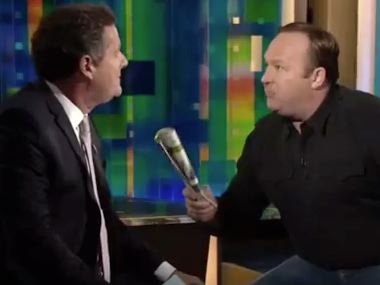 If you enjoy live television and the insane as much as I do, I sincerely hope you were able to witness the recent mano-a-maniac showdown between CNN's Piers Morgan and gun-nut "truther" Alex Jones.  If not, you really owe it to yourself to watch the clip in its entirety.  It can't replace the thrill of having seen this train wreck pull into crazy station in real time, but it is still a marvel to behold nevertheless.

Say what you want about Morgan.  He's an insufferable name-dropper and an unapologetic Royalist.  He quite probably had a hand in some rather dastardly policies at his old job at The Daily Mirror. He repeatedly says things like, "People say I'm courageous for speaking in favor of gun control, but after the tragedy at Sandy Hook, I don't think I'm being courageous in demanding we do all we can to stop the murder of innocent children" (Yes, Piers, we all think you are courageous for echoing an opinion that most sentient beings already support).  There are many, many reasons to dislike Piers Morgan, a man truly without a country in that he has inspired petitions of exile on both sides of the Atlantic (Jones wants Morgan deported back to England.  The UK wants Morgan to stay put in the USA).

But Piers Morgan is also a pro, and in his interview with Jones he has enough sense to shut up and get out of the way, allowing his "guest" to run screaming down each and every blind alley of his paranoid maze.  Staying true to current wingnut debate strategies, Jones clearly thinks he is winning the day here by simply ignoring Morgan's attempts to engage him (clearly, any issue Morgan might raise will only be a liberal "trick," so why bother debating him?).  In order to keep Morgan from talking, Jones has no other option but to cycle through all the usual gun-nut yelling-points as quickly as possible. It's an amazing performance, if only to witness how thin the line is dividing wingnut free-stylin' from schizophrenic "word salad."

Baudrillard once observed that it is much more effective politically to behave like an object (unreasoning and unyielding, like a child that registers displeasure by becoming dead weight on a parent's arm) than it is to participate in the enlightenment charade of rational subjects engaged in rational dialogue.  Much like the GOP congress, Jones and his peers have clearly taken this lesson to heart.  When you have no constructive ideas to contribute and everyone is against you, your best strategy is to luxuriate like a massive turd plugging the colon of public discourse.

As the current king of the gun nuts, Jones certainly does not disappoint during his moment in the lamestream media sun.  Aficionados of American crazy will all find their own personal highlights here.  I love the moronic projection involved in belittling Morgan for using note cards filled with  "factoids" even as Jones himself rifles through his own crumpled notes for his ironclad stats.  Challenging Morgan to a boxing match is also choice, especially when Jones vows to don the stars and stripes and invites Morgan, oddly, to wear the "Jolly Roger." At one point his desperation to dominate the air space becomes so frantic that, if my ears do not deceive me, Jones states a study at the University of Hawaii killed a large number of people.

And then there is Alex Jones as Eliza Doolittle, suddenly affecting a posh British accent in an apparent attempt to mock Piers Morgan as.....well, as what?  British?  In addition to being flat-out hilarious, this bit of schoolyard taunting also provides tremendous insight into the gun nut mind.  Jones' paranoia becomes so florid at this point that he seems to regress into the actual "Spirit of '76," calling Morgan a "redcoat" and mocking his accent as if the historical alliance between the UK and the USA through the past century had never happened.  Jones may well be hallucinating at this point.  Only moments earlier, he invites Morgan to "come to America"- -even though the two men are in CNN's studio in New York.  I'd like to think Jones, at this point, is having a feverish vision of Morgan in a powdered wig holding a snuff box.

If I were better versed in rhetoric, I would know the exact name for this particular mode of fallacious reasoning. As I am not, let's just call it out for what it is: colossal stupidity.

Just for the record, below is how I believe most sane people would rank the desirability of being attacked by potential objects that exist in the material world:

How crazy is Jones?  A quick search of the Internet reveals that even the far right doesn't know what to do with him. Many wingnuts appear to believe that Jones is actually a COINTELPRO plant, deployed by the tyrannical forces of the World Government to make everyone who opposes them look insane (just like on The X-Files!).

Others maintain Jones is just a huckster looking to plant a potentially lucrative flag to the right of Glen Beck.  Who knows?  He may well be.  But whether or not Jones really believes his own rants probably doesn't matter all that much--his "performance" has the same structural effect in the public sphere either way.

Real or no, however, Jones' outburst on CNN is a powerful demonstration as to why there will never be a "conversation" about guns in the United States, at least not with gun nuts.

What is a "gun nut?"  Cue Jeff Foxworthy.

If you think about guns at some point in the day, each and every day of your life, you may just be a "gun nut." 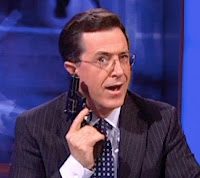 Many people own guns, most of whom are upstanding, responsible individuals who keep them for hunting, home defense, target shooting, etc, etc.  So when I use the term "gun nut," I am speaking about a very specific subcultural posse comitatus.  In this respect, the true gun nut is no different than people who have a similar psychosexual attachment to chocolate or auto-erotic asphyxiation.  It is a fetish elegantly captured every time Stephen Colbert pulls "Sweetness" out of his desk to whisper sweet nothings into her barrel.

And it is this element of fantasy and desire that makes a rational conversation about guns impossible, at least with gun nuts.

Progressives proceed from a mistaken assumption. Those who favor drawing a more reasonable Constitutional line between a single-shot musket and an Uzi often believe that gun nuts are AFRAID the government will try to take away their guns.  Gun nut paranoia, in this case, is thought to be a function of FEAR.

But that isn't the case.  Instead, gun nuts like Jones desperately HOPE that the government will try to take away their guns.  It would be the ultimate realization of their most profound fantasy. Gun nut paranoia, from this perspective, is a function of DESIRE.

Jones' outburst is a veritable kaleidoscope of the adolescent fantasies that hold together the gun nut's psychic universe.  Heroic exceptionalism. Unjust persecution. The conspiratorial world of more powerful "adults." Delusions of grandeur.  Impending martyrdom.  After all, what is Charlton Heston's famed "cold, dead hands" line other than the gun nut version of the sulky teenage boy fantasizing about how sorry everyone will be when he's gone and they finally realize he was right?  Don't come crying to me when you're in the Obama re-education camps having Satan's UPC mark branded on your ass. I tried to warn you!

Most of the time gun nuts can focus their fantasy life on the erotic thrill of the "justified shooting." There is probably no more powerful masculinist fantasy on the planet than imagining oneself taking out a robber or rapist who has come after you and your property.  Slightly less charged, but thrilling nonetheless, is the fantasy that you will be the hero who takes out a slimeball assaulting someone else's property.  Heck, it's even pretty great to imagine yourself as Atticus Finch in To Kill a Mockingbird, stepping up to the plate and doing what needs to be done when a rabid dog wanders in from the cornfields.

This is why George Zimmerman's shooting of Trayvon Martin proved to be such a huge crisis in gun nut world.  Here was a potentially sublime justified shooting ruined by all the pesky details.  Thus the fevered campaign to reimagine Martin as more in line with the fantasy figure that skulks through so many gun nut daydreams of justified shootings. The hoodie. The pot. The "suspicious" behavior. The uppity audacity of a black teenager fighting back against a duly deputized authority.  For the fantasy to survive, gun nuts had to concentrate really hard to conjure up their own idealized image of Trayvon Martin, much like a teenage boy taking a last look at his supermodel poster before turning off the lights in his bedroom. 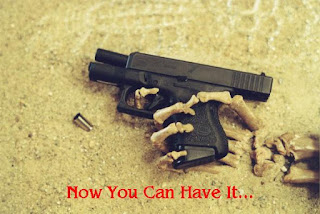 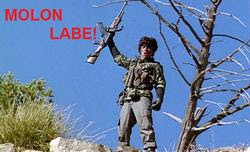 Most of the time gun nuts can focus their fantasies of justified shootings on the various criminal types they imagine will one day bust down the front door (fingers crossed!).  But when guns are in the news and talk of "gun control" is in the air, a young gun nut's thoughts turn toward the tyrannical government. That's when they really lose it, as evidenced by Jones. Ruby Ridge! Waco! The Alamo! Suddenly they are starring in Red Dawn, giddy at the prospects of mowing down former ACORN workers parachuting onto their land to take their arsenals. Imagine if Obama really did try to take all our guns away, wouldn't that be amazing!  I'd finally get to use all my guns, all my training, all my ammo!

And this is why you can't reason with gun nuts. Everything you say, every reasoned point one might make about guns and social policy, is just part of a script they've already rehearsed in their minds a thousand times, a prelude to that orgasmic moment when the U.N. orders are signed, the family gathers in the bunker, and Big Daddy gets to take all his toys to the attic to wait for the black helicopters and blue-helmeted goon-squad.

It's not that gun nuts don't hear or understand those who advocate for a civilization with fewer people packing heat--they just hear such blather for what it is: endless, Glock-teasing seduction.