One of the more lucid explanatory passages in Deleuze and Guattari’s canonical brain-buster Anti-Oedipus is their illustration of a schizophrenic milk drinker, a clarifying example offered to thin out the butterfatty complexities of the famous “desiring machine.”  As D & G observe, “Desiring machines are binary machines, obeying a binary law or set of rules governing associations: one machine is always coupled with another.  The productive synthesis, the production of production, is inherently connective in nature.” A glass of milk thus schizo-rendered through reverse-engineering: “the anus-machine and the intestine-machine, the intestine-machine and the stomach-machine, the stomach-machine and the mouth-machine, the mouth-machine and the flow of milk of a herd of dairy cattle (‘and then…and then…and then…’) (page 59 if you think I’m lying).  This decision to recast the psychic universe as a Rube Goldberg network of interlocking machinery helps D/G offer a more productive model of desire (as opposed to the Freudian/Lacanian emphasis on the repressed absences that structure psychoanalytic models). In a world liberated from the implanted repressions of psychoanalysis, a new call to “schizoanalysis” would, in theory at least, open us all to ever mutating calls to oceanic desire washing through, across, over, underneath, in, and out of the Body without Organs, a “body” as yet unspoken and uninscribed by repressive regimes of power and pleasure. 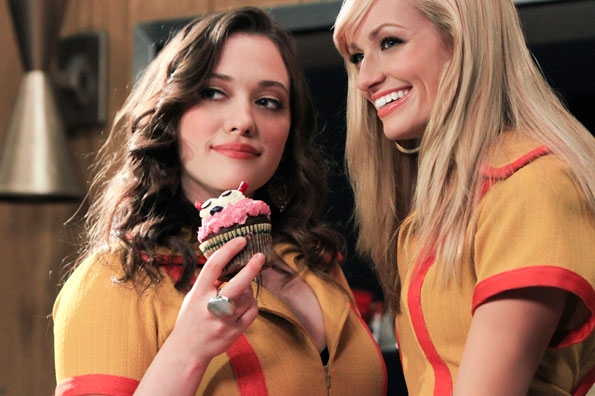 While it is always difficult to imagine schizophrenic phenomenology, especially as we cling to our own putative notions of personal sanity, I believe CBS has come as close as possible to schematizing the dynamics of a desiring-machine in their 9 pm comedy block on Monday nights.  Considered separately, neither 2 Broke Girls nor Mike and Molly is particularly impressive—just two boilerplate proscenium sitcoms.  But when fused, grafted by undifferentiated promo-tissues at the half-hour break, they create a productive synthesis in the form of an endless bio-canal of alimentary, excretory, and sexual peristalsis, an endless cycling of eating, licking, puking, shitting, pissing, rubbing, sucking, and fucking.

In the new season, blondbrokegirl has even started a relationship with a handsome young man who owns his own candy store, thus doubling down on the cupcake fantasy of perpetually plugged sugar holes.  Brunettebrokegirl supports the relationship because it portends unlimited access to candy, providing a momentary diversion from already unlimited access to her own masturbatory baking.  In another episode, brunettebrokegirl meets blondbrokegirl’s father for the first time…in prison…and immediately becomes visibly disorientated at the thoughts of having spontaneous carceral intercourse with him, an incest fantasy so barely displaced as to endanger its status as fantasy.

Lurking mysteriously in the wings, meanwhile, is Chestnut, an honest-to-God horse forced to live in the pretend backyard of the brokegirls’ pretend Williamsburg apartment. I quickly lost interest in Chestnut once I realized he couldn’t talk and thus was not to be an homage to that other great schizoanalytic sitcom, Mr. Ed.  But then I realized Chestnut’s true narrative function, like everything else on the show, was primarily sexual.   He stands as a reminder of a girlish eroticism, typically horse centered, ready to run amok at any moment, perhaps breaking free to gallop past various Brooklyn record stores and Fedora boutiques with a mounted blondbrokegirl tingling in exhibitionist ecstasy.  He is the candy-coated unicorn of childhood fantasy made real in horseflesh, and a constant reminder that there is indeed another place this series can go …eventually …inevitably.

In the other series, meanwhile, two morbidly obese libertines lumber up and down the stairs from kitchen to fuck-pad and back again, eating to screw, screwing to eat, pausing briefly to discuss their obstacles in eating and/or screwing with their friends and family.  Excesses in this bifurcated desire lead to belching, farting, vomiting, dieting, and in this season, perhaps even children.  Because the show is set in Chicago, beer flows freely, a lubricant for further screwing and eating.  Supporting players drift in an out of this Caligulan amphitheater to better emphasize the plentitudinous perfection that is Mike and Molly’s mutually consuming desire.  The sister, a fecund earth-goddess perpetually high on pot, wanders the streets of the city in search of random sexual partners, perhaps a mammoth-penised Rastafarian to make her/them complete.   A jilted co-worker, meanwhile, is perpetually depressed as he cannot obtain the corpulent synthesis enjoyed by his pal Mike.  Most episodes he appears borderline suicidal.

Now, it may seem like the above is ridiculing these shows for being so obsessed with the "low" comedy of bodily functions—but nothing could be further from the truth.  What makes these two series schizopathic rather than psychopathic is their absolute liberation of any repressive function whatsoever.  Two and Half Men, previously the gold standard in orifice and organ jokes, still retains a sense of the “naughty” that now seems positively Victorian.  While the two and a half men still deliver jokes that have a winking relationship to the salacious and obscene, the two broke girls and their horse have completely worked through all vestiges of guilt and shame so that they might roam the earth as a walking Kegel exercise, wholly present in their Reichean quest for the perfect orgasm/snack cake (ed. note: originally typed "snake cake," thus proving the power of the brokegirls' siren song to lure the repressed onto the craggy rocks of wholly unfettered desublimation).  There is no “lack” in their universe, no undertow of repression, only the systematic and unapologetic writhing of the organism toward further stimulation of its sugar/salt receptors and ever engorged clitoris.  Why do they continue to work at making cupcakes, one wonders, when their obvious destiny is to fabricate some manner of Pez-dispensing dildo?

Meanwhile, it would also be very easy to reclaim Mike and Molly through some appeal to the popular body via Bakhtin and the carnivalesque—but no!  To do so would only endorse the show’s humanitarian attempt to blunt its true subversion behind the comforting charade of “working class” identity.  To indulge the more conservative tastes of the modern repressed, Mike and Molly locates its hungry, hungry bodies in the rituals of the downscale Midwest, allowing some viewers to believe—from a position of envy/superiority—that the poor eat and screw more and differently than you and I.  But Mike and Molly are not to be shamed or dismissed for their bottomless appetites; rather, they are a call to dismantle the final shackles of civilized repression.   Joggers, vegans, virgins, tea-totalers, non-smokers and all the other saps who have bought into "civilization's" politically convenient calls for abstinence and temperance, Mike and Molly are daring you, the timidly disciplined, to break free and couple your every orifice with food, flesh, and intoxicants.  Melt now into a free-floating blob of pleasure without source or limit.  You can be skinny, sober, and chaste when you DIE.

---------
In other CBS news, the half man over at Two and a Half Men has apparently grown weary of smelling his own farts.  For more, click here.