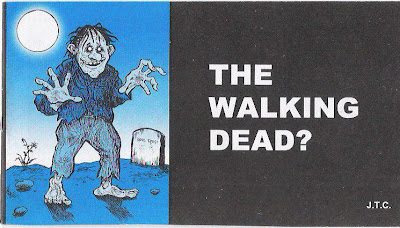 Snatching this from a rack by the subway, I had high hopes that Chick, Inc. was finally weighing in on the demonic influence of AMC's glacially-paced zombie melodrama of the same name.  Over the years, JTC Comics has repeatedly issued pamphlets exploiting and condemning the popularity of various "occult" entertainment franchises, a tradition that goes all the way back to their classic "watch Bewitched and go to hell" comic from the early 70s.

But alas, here Chick simply draws on the zombie mythos as a metaphor for life without God.  Danny, who I think we are supposed to read as a Latino ex-con, keeps having the same nightmare every evening.  He's in a graveyard hiding from zombie-ghouls.  He tries to sneak away, but a hand comes up out of the grave Carrie-style and grabs him by the throat. A zombie, a werewolf, and someone who looks a bit like Sid Vicious welcome Danny to their "family" of walkers.  Danny wakes up screaming.  His aunt and uncle, who apparently are putting Danny up after his latest stint in prison, interpret Danny's dream of the "walking dead" as an allegory for those who walk the earth unsaved.  They give Danny the good news. 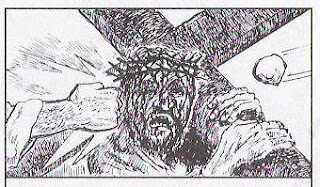 Chick publishing seems to have made a turn lately toward targeting Latinos for the evangelical cause. It's difficult to know for sure as Chick is such a terrible artist, but I am reasonably certain that Danny's prison tats and thin mustache are meant to evoke a certain Mexicanicity.  Now, those who know JTC enterprises know that he is no fan of Catholicism, which is very popular in Mexico, so this new series is no doubt an attempt to scare the Pope out of recent immigrants and get them in line with Chick's hardcore vision of the Baptist faith. 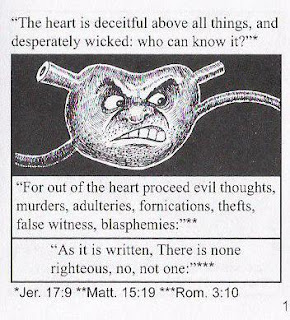 Chick has a certain advantage in this, given that his comics generally contain a panel or two of the most gruesome horror.  Here, Chick uses his allotment of excess to amplify the Passion into the Gibson-esque territory of Catholic Grand Guignol. Already bloodied, Chick's Christ is also getting punched in the face and hit by a rock at the same time!

But overall, The Walking Dead is a bit tame given the high expectations that come with the Chick brand.  I did like, however, JTC's rendering of the "deceitful heart" as a snarling organ in your chest that can't wait to break free and do some murdering, evil thinking, fornicating, and blaspheming.  It's already freed itself from two veins and/or arteries.  Two more and it's going to be out there getting into a lot of trouble.