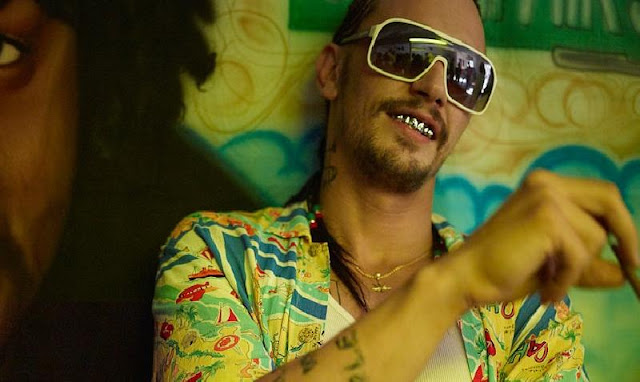 In a fair world, or at least one less crippled by stupidity and mediocrity, James Franco's "Look at my shit" speech from Spring Breakers (2013) would be one of the scenes featured in the Academy's "Best Picture" clip-reel at next year's Oscars.  Just imagine how amazing it would be to see Ron Howard, Ryan Gosling, or some other safely bankable Hollywood functionary forced to take the stage and read an Academy staff writer's impression of what Spring Breakers is about:

"In a chilling performance, James Franco captures the essence of evil as he seduces four young girls into a life of crime..."

"James Franco is terrifying as the local crime kingpin who turns an innocent rite of passage into a nightmarish ordeal."

All of this would be bullshit, of course, but probably as close as Hollywood could come to getting a moralistic bead on this movie's unapologetic nihilism.  But it would all be worth it to see the lights in the Kodak theater go dark so that TV America could witness the corn-rowed, grill-bedazzled "Alien" (James Franco) inventorying the contents of his sick St. Pete bedroom:


This is the fuckin' American dream. This is my fuckin' dream, y'all!


I got designer T-shirts!


I got gold bullets. Motherfuckin' VAM-pires.


I got Scarface. On repeat. SCARFACE ON REPEAT. Constant, y'all!


That ain't a fuckin' bed; that's a fuckin' art piece. My fuckin' spaceship! U.S.S. Enterprise on this shit. I go to different planets on this motherfucker! Me and my fuckin' Franklins here, we take off. TAKE OFF!


I got my fuckin' NUN-CHUCKS.


I got shurikens; I got different flavors.


I got them sais. Look at that shit, I got sais. I got blades!


Look at my sheeyit! This ain't nuttin', I got ROOMS of this shit!

This will never happen, of course, because Hollywood will be too busy auto-fellating itself with the historical import, social relevance, and quality competence of another Lincoln or Argo.  Meanwhile,  Harmony Korine's sublimely ugly and mean-spirited takedown of American awesomeness will likely go unnoticed, a film that in its own way says, "yeah, Lincoln was a great guy for passing the 13th Amendment and Argo is the story of some very heroic patriots, but in the end, nothing could stop America's manifestly obscene destiny to become a nightmare of beer funnels, breast implants, blow, and Skrillex.

There are so many things to admire in Spring Breakers. Dear God, the opening-- Topless coeds reclining in crablike submission before a line of frat guys dousing the tit-line in beer drizzled from cock-level, all to the throbbing beats of a "brostep" soundtrack (and what is Skrillex, after all, if not the sound of a giant throbbing dick?  Rockers used to just sing about how awesome it was to have a penis.  With Skrillex, it's as if contact microphones have been buried deep within the corpus spongeium to capture the slow-motion sonic spasms of penile ejaculation).  Truly, the opening five minutes of Spring Breakers is the most terrifyingly apocalyptic marriage of sound and image since A-bomb met "We'll Meet Again" in Dr. Strangelove.

There is also the beautiful deflation of the particularly American and particularly pathetic fantasy that one can "reinvent" oneself by going someplace warmer with more sunshine (as Nathanial West's Homer Simpson discovers, the only difference between being miserable in Nebraska and miserable in Hollywood is that Hollywood adds the additional misery of thinking one should be happier because they are no longer in Nebraska).  Thus the film's dreamlike mantra from Alien/Franco, "Spring Break foe-evah, y'all," as if a life of perpetual intoxication, fucking, and sun-drenched beach-balling wouldn't eventually become its own version of hell (or at least a gateway to terrible, terrible chaffing). In a particularly nasty running commentary, Faith (Selena Gomez) waxes rhapsodic about how she has finally "found herself" during the trip to Florida, that "self" being a drunken sloth motivated primarily by a reluctance to go back to college and do something useful in life.

There is also the subtle formal play, where each significant scene comes together slowly through audio repetition and a gradual elaboration of the space.  Spring Breakers is experimental enough to leave some spatio-temporal (and thus narrative) relations in ambiguity, and yet it is narratively cohesive enough to dangle two successive genre hooks ("Spring Break" film to "Crime Caper" movie) that end up frustrating any viewer actually expecting either of these genres to play out.

As an educator, I also appreciated the irony of the girls ignoring a lecture on the black civil rights movement to express, in ink, their desire for spring break cock, and then embarking on an adventure that culminates with two of them slaughtering the African-American drug-workers who have made their week of weed and coke-fueled fornication possible.  Circle of white-privileged life, that.

Spring Breakers' most impressive move, however, is its mid-point switcheroo, that moment when the power dynamic shifts to reveal the film's ultimate destination--a merciless examination of a millennial soullessness that believes itself entitled to endless sensory agitation and ever-escalating plateaus of pleasure.

When the foursome first meet Franco as sleazy bondsman, Korine deftly exploits America's intense investment in white teenage girls (especially blonds) to generate an extended sequence of sexual menace.  Ass, grass, or gas, right?  Nothing's free. Alien will get his bail money back one way or another.  The situation becomes even more charged when "whigger" Alien takes his four bikini-clad guests to the pool hall in the black gangsta section of St. Petersberg.  Those girls are going to get raped, thinks every white middle-class person in the audience (even though the drunk fratfucks back at the beach are a much better bet for sexual battery).  Being semi-nude in front of black men is so troubling for Faith, it actually makes her the first to defect.  Later, Cotty (Rachel Korine) takes a bullet to the arm, making her the second to get out of dirty Dodge.  But that leaves two, Candy (Vanessa Hudgens) and Brit (Ashley Benson).  Before you know it, they have Alien fellating his own loaded handguns, leading to a powerful epiphany--white college girls who feel entitled to the powers and pleasures that are their birthright are much more fearsomely evil than any bumbling, dumbass, drug-dealing, whigger, wannabe rapper like Alien.

All of which makes the film's Britney Spears interlude all the more haunting, Alien expressing his "sensitive side" in a tableau of tragic kitsch, playing Spears ballad "Everytime" on a white piano outside by the pool.

It is a moment of mass-elite pornography, a charged image of just how shitty the world has become in a scant ten years, made all the more poignant in that Alien appears so genuinely moved by this treacle.
And this is perhaps the film's biggest surprise.  Alien, the drug-dealing playa who preys on America's teenage tourists, ends up being an almost tragic figure of quaint nostalgia.  The real "aliens" are Candy and Brit, emblematic of a new social order of normative sociopathy, a world where the blocks, neuroses, and repressions of the Freudian unconscious have all finally evaporated. Alien became a criminal because he was poor and needed the money. And he at least feels a little bad about having to murder his old mentor, Archie.  Not so Candy and Brit.  They'll do it for money. For drugs. For revenge. For orgasms. For notoriety. For the fuck of it. For the intense pleasure that comes with exercising a type of violent sexual power (an orgy rehearsed earlier in a Quik Stop parking lot). They are pure surface in search of pure surface stimulation and they are the future.

In many ways, Spring Breakers is even more courageous than Korine's previous and still most notorious exercise in outrage, Gummo (1997).  Whether Korine was sincere or not, Gummo at least feigned some sympathy for those trapped in the hell of the white rural underclass.  The community's poverty and lack of education gave the viewer some cover for trying to understand why exactly some poor souls might find it awesome to pour gasoline on a cat and light it on fire.  But Spring Breakers is propelled by pure contempt.  It really seems to hate the world it is depicting.  And that's okay.  Certain subjects demand contempt.

Moreover, the film's vérité cast of actual spring breakers mirrors this contempt back to the camera whenever it gets the chance.  The story is disturbing, to be sure, and its politics a bit dicey perhaps. But nothing is more unsettling than the repeated B-Roll of various spring breakers in their aviator shades, swaying drunkenly while presenting genitals engorged with blood, cocaine, and Red Bull, flipping the bird to no one in particular in an abstract gesture of "fuck you-ness."  Who is this bird directed at? Perhaps it is some unseen person or force who would dare challenge the flipper's right to perpetual stimulation and an attending sense of free-floating awesomeness.  Or maybe, in the new sociopathy, pleasure itself becomes increasingly contingent on radiating contempt at those around you, those who might challenge or even take away your right to perpetual stimulation and free-floating awesomeness. 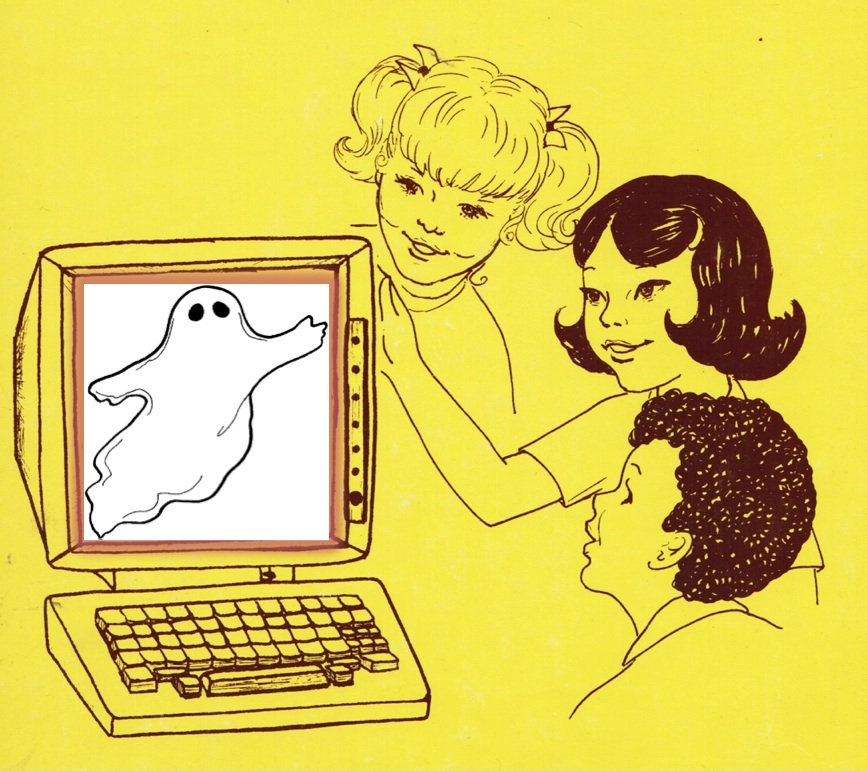 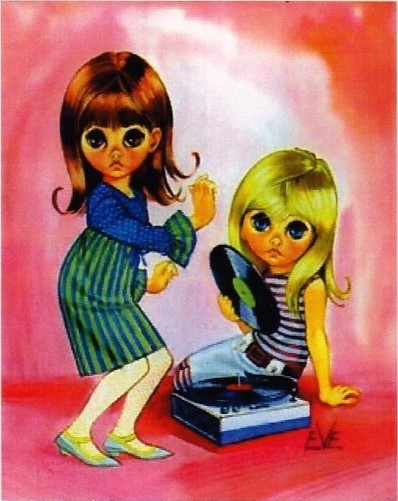 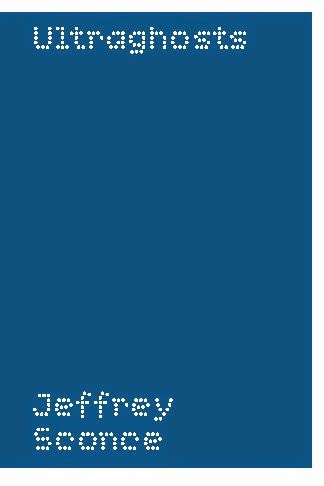