Dissecting the Toad: An Appreciation

Onion SportsDome
Why is the clip above so brilliant?
Get out your poking sticks, it's time to seek wisdom from the Toad.
The cruel spectacle that follows is obviously a regular feature on the mythical SportsDome (now running on Comedy Central), so highly anticipated that it has earned its own "catch-phrase." The catch-phrase, meanwhile, demonstrates that the ritualized humiliation of the Toad has become so normalized that the producers have integrated the weekly "stick-poking," necessary to elicit the Toad's wisdom, as simply another part of his "bit."
The Toad's graphics package appears: digital animation of a mysterious and exalted temple in the swamp surrounded by mystically hovering fireballs--The Toad sits like a King atop the structure, ready to receive tribute for his remarkable ability to predict the outcome of sporting-related events.  But then we cut to the Toad, who in fact has no temple, but is instead incarcerated in a steel cage and accompanied by two guards...with poking sticks.
Nobody's sure where he came from or what he is, all we know is there is nobody better when it comes to picking games.
A summation of the bit: a "being" captured in the swamp, neither man nor beast, has a seemingly preternatural talent for predicting sport scores.  But in the twisted delusional universe of those addicted to hour after hour of cable Sports news, the incredible scientific and philosophical discovery of the first being beyond our species to master a spoken human language is secondary to his utility in predicting the outcome of sporting events. 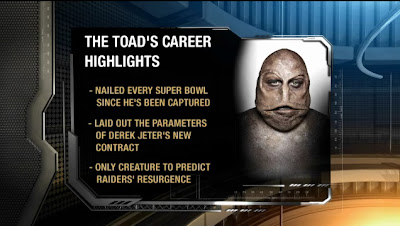 Let's check out the Toad's resume...Over 99% against the spread in football
Not only does the Toad have the mystical power of picking winners, something that might be explained as merely a miracle coincidence of repeatedly choosing correctly between two possibilities, but he can also "beat the spread," demonstrating that his knowledge of the game actually goes much deeper. We also read here that he has predicted every Superbowl since "being captured" and that he "laid out the parameters of Derek Jeter's new contract."  The second achievement is particularly remarkable given that the Toad appears capable of speaking only a few articulate words at a time.
Are you ready, Toad?  (Indecipherable sound of swamp despair)  Awwright!
Perfunctory greetings are exchanged between host and expert.  Matt Walton as "A.R." thoroughly nails the TV sports dialect (as does Matt Oberg as his co-host).  Most of the humor of SportsDome is filtered through this now wholly naturalized yet thoroughly perverse "dialect," a constant performance of insincerity and awesomeness that has come to dominate the airwaves since the debut of SportsCenter.  The Toad, the poor tragic Toad, emits a tiny, ambiguous cry.  Is it pain?  Is it despair?  Clearly he would prefer to be back in the swamp.  But "A.R." simply translates the plaintive moan back into generic "bro-talk," responding with the frat-guy swamp call, "Awwright!
First game, Rockets at Knicks.  Who do ya like toad?
Despite the fact that the miraculous Toad is trapped in a steel cage and experiencing some mixture of physical and spiritual discomfort, his "segment" will proceed as if it were just casual bar talk.  Who do ya like Toad?
You heard it from the Toad so you know that pick is gold!
Probably the Toad's most familiar "catch-phrase," a rhyming way of branding his appearances and touting his success.  In fact, the Toad's powers are so "golden" that we are encouraged to call Vegas before the odds change, leading to the revelation that the gambling industry has sought on several occasions to "buy" the Toad, thereby reaffirming that he is--despite his miracle of language and sentience--little more than property of the sports industry.
No Dallas
The Toad can understand English, hearing questions and giving answers--but clearly it is difficult for him.  Here he expresses his lack of confidence in the Mavericks by reverting to the most elemental grammatical construction possible: No Dallas.
After a refreshing sponge bath, the Toad is ready to "open up the mailbag" and take questions from viewers, a prospect that seems to interest him somewhat slightly as he moves closer to A.R. in anticipation.  Here the delusional world opens out to the viewers.  Obvious, seemingly insistent questions like "How did you learn to speak?", "Where did you come from?", and "Are there more of your kind?" are instead replaced by still yet more inquiries into increasingly trivial sporting matters.
Mauer!  Mauer!
When challenged on his pick for this year's MVP in Major League Baseball, the Toad appears angry.  But where does this anger come from?  Is it the anger of the sports buff who does not appreciate challenges to his expertise, or is it the anger of a creature taken from the swamp and forced to participate in these spectacles of humiliation.
Toad, who d'ya got, Buckeyes or Boilermakers?
Not only does the Toad's expertise cover professional sports, but he is also capable of seeing into the future of NCAA basketball, called upon here to handicap a Big 10 match-up with the added variable of a key Purdue player being injured.  This prediction takes longer, inducing some cattle-prod shocks from his keepers.  Is it because the Toad has grown weary of his torment and is now actively resisting?  Or is it because this particular prediction requires more thought.  A quick indulgence of fish heads ("that should placate him") appears to settle the Toad's mind and mood and he is ready to proceed. 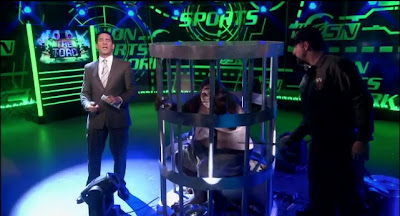 Toad likes the Buckeyes!
So much so that this final prediction sends him into a paroxysm of cage-rattling anger.  Time to toss back to the studio where A.R.'s colleagues comment on this 8th wonder of the world by engaging in still yet more rehearsed sports-prattle
Gotta love it when the Toad stops by....The Toad knows his stuff.
A final irony: the Toad doesn't "stop by," he is in fact dragged from an aquatic tank of some kind and restrained in a cage, forced to perform his wisdom about stuff--perhaps the perfect word to describe this branch of particularly useless knowledge that so many have spent so much time committing to memory.  And really, in the end, isn't the Toad rather like the sports fan himself--a miracle of nature capable of language and abstract thought who nevertheless spends valuable moments of his life worrying if the Buckeyes will beat the spread?
Email Post
Labels: Animal Kingdom Intentional Comedy The TV